Loading...
About STW1 2021-01-12T17:22:18+00:00
“Business Attire” Necklace by 2Roses, Hinged bracelet by Statements Accessories and Orbit earrings by Gina Pankowski
These pieces were created by Robert Lee Morris in the ’1970’s. In 2005, We exhibited (and sold) these archival works in his 35 year retrospective, titled after his book, The Power of Jewelry.

History of Sculpture to Wear

Joan Sonnabend opened her tiny gallery at the Plaza Hotel in New York in 1973 with a 100 piece collection of “sculpture to wear.” Included among the pins, necklaces, rings and bracelets, were works by such celebrated artists as Man Ray, Pol Bury, Picasso, Arp, and Calder. She became friendly with many of them, and maintained these relationships for many years. From the time she graduated Sarah Lawrence with an art degree, she always knew she wanted to open a gallery. She never considered herself a jeweler, but rather an art dealer. She sold fine art works by important and emerging artists; only these pieces were meant to be worn rather than hung on a wall.

In 1973, the Institute of Contemporary Art in Boston, mounted a show called “Jewelry as Sculpture as Jewelry.” The intent of the show was to elevate body ornament to the level of art. It showcased artists and jewelers who were interested in using multiple or unconventional materials. Joan Sonnabend’s gallery at the Plaza was responsible for the creation of a market for artists’ made studio jewelry.

“For me personally, Joan opened my eyes to the interplay between jewelry, sculpture, adornment, and art. She always believed in the power of art and remained an art dealer until her passing”, writes her friend Gloria Lieberman. Joan Sonnabend influenced numerous people with her insight and passion, and helped many artists begin their careers. Robert Lee Morris is among the jewelry artists she discovered and represented at her gallery. Years later, Morris opened up his own gallery, ARTWEAR, and went on to represent over 400 jewelry artists and host over 50 exhibitions.
– by Gloria Lieberman, for Skinner Auctions

Over the decades, Sculpture to Wear has been located on both the East & West coasts (Beverly Hills, Melrose Ave., Bergamot Station Art Center, Montana Ave., now Laguna Beach) but wherever it lands, it remains an institution for creatives and visionaries alike who create collectively and inspire, with the encouragement of collectors and art jewelry advocates. I opened my gallery with an exhibition called, Structural Integrity in Bergamot Station on Jan. 16th, 1999, ironically with a retrospective of Man Ray’s work by Robert Berman opening that same night. Even though we never met, my passion has been to honor the legacy that Joan launched, to keep her vision alive, as well as cultivating my own version of Sculpture To Wear. And to wear fabulous jewelry along the way!

Lisa M. Berman, Visionary Proprietor– is an internationally recognized “Ambassador of Wearable Art”. Based in Southern California, her expertise extends to major manufacturing and retail markets, museums and corporations in the United States Canada, Mexico, Asia and Europe.

Lisa has served on the Board of Governors for OTIS College of Art & Design, as Public Relations Chair for the Textile and Costume Council at the Los Angeles County Museum of Art (LACMA), and the Museum Collection Board at Fashion Institute of Design and Merchandising (FIDM). She volunteers for Free Arts for Abused Children, STEAM projects and Art & Fashion Councils.

Ms. Berman holds degrees in Plastics Manufacturing Technology from California State University Long Beach, Product & Jewelry Design from Otis College of Art & Design, Merchandising / Marketing from FIDM. She designs jewelry for her brand Statements Accessories and styles celebrities for the red carpet under “Go To Style Diva”. From a family of inventors and fashion designers, Lisa is inquisitive and resourceful by nature, often creating unexpected things from what’s at hand. She solders and welds, but doesn’t bake. She has a precocious daughter Chiara Lisette. 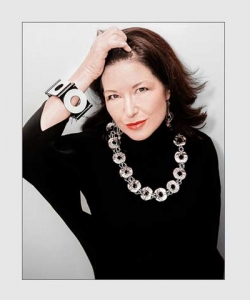 Since 1999 her wearable art gallery Sculpture To Wear, has offered an eclectic array of art, jewelry and unique objects to discerning collectors, media producers and institutions, which are featured in film, television and publications. Her passion is to authentically propel the legacy of the historic gallery founded in NYC in 1973, which helped launch the studio jewelry movement in the United States. She is thrilled to be named the National Contributor to US LIfeStyle Group Magazine for Art, Culture & Style. Her mission is to inspire others to WEAR ART!